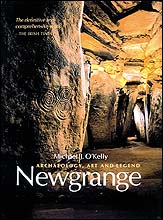 Professor O'Kelly, the most distinguished authority on Newgrange, demonstrates that this remarkable megalithic tomb, 'the great national monument of Ireland, was built about 3200 BC by Neolithic farmers, who possessed considerable expertise in engineering, architecture, art and astronomy.

Not only did they erect a monument which has stood virtually intact for thousands of years, but they deliberately orientated it so that each year, on midwinter's day, the rays of the rising sun would shine through a special aperture to illuminate the inner passage and chamber.

Every stage in the excavation, interpretation and restoration of the site is described and fully illustrated, with additional major contributions from Claire O'Kelly, who collaborated in her husband's work at Newgrange from its beginning.