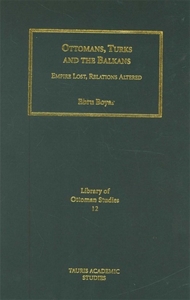 The loss of the Balkans was not merely a physical but also a psychological disaster for the Ottoman Empire. In this frank assessment, Ebru Boyar charts the creation of modern Turkish self-perception during the transition period from the late Ottoman Empire to the Turkish Republic. The Balkans played a key role in identity construction during this period; humiliated by defeat, the Ottomans were stung by what they saw as a betrayal and ingratitude of the peoples of the region to whom they had brought peace and order for centuries and whom they had defended at the cost of much Turkish blood. It induced a sense of isolation and encapsulated the destruction of the Ottoman Empire's military machine and sense of self-esteem by the Great Powers. This victim mentality was sustained by late Ottoman history-writing and by the historians of the early Republic, for whom history was an essential tool in the creation of the new Turkish national identity for the new Turkish Republic of the 20th century.