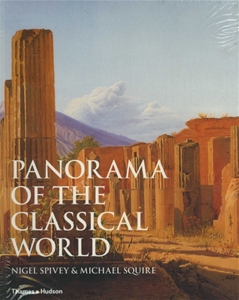 Panorama of the Classical World

The world of ancient Greece and Rome is the starting-point for everything we understand about philosophy, science, literature and art.Panorama of the Classical Worldrecreates that era and offers a strikingly original account of Classical antiquity. Throughout, the authors demonstrate the continuing relevance of the Classical world today.

Nigel Spivey and Michael Squire have analysed the ideas and values that lie beneath the history: the centrality of the body in life and death; society, sexuality, gender and the family; hygiene and diet; the worship of gods and admiration for heroes; money and economic life; war and rebellion; politics in theory and in fact.

Original insights are supported by an anthology of extracts that provide ‘soundbites’ from the ancient world. The illustrations include many never before published in a book of this kind and go far beyond the familiar masterpieces. Painted vases, marble sculpture, bronzes, wall-paintings, coins, buildings, archaeological sites – every aspect of the story is given a striking visual context. Extra features include illustrated‘dictionaries’ of Classical lives and mythology, aglossary,timeline, andmap.

Nigel Spiveyis Lecturer in Classics at the University of Cambridge. His many publications includeEnduring Creation, the prizewinningUnderstanding Greek SculptureandEtruscan Art.Michael Squireis a Research Fellow at Christ’s College, Cambridge, working on a variety of topics in the field of Graeco-Roman visual culture and the Classical tradition.