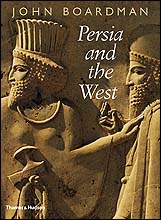 Persia and the West

In the 6th century BC, with no local tradition to guide them, the early kings of the Achaemenid Persian empire, Cyrus the Great and Darius, had to devise new styles in monumental architecture and sculpture with which to decorate their capital cities and express their mastery of the known world. A homogeneous style was created from the idioms of the many new subject peoples — Ionian Greeks, Lydians, Mesopotamians and Egyptians. This book traces these sources and explores the way that traditional Achaemenid motifs and styles also permeated the empire.

The Achaemenid Persian experiment was unique in antiquity, and it was successful for as long as the empire lasted. Even after Alexander the Great brought about its downfall, it continued to influence the arts from Greece to India. This is a record of the brilliant evolution of an artificial yet unified style, unmatched in the history of the art and archaeology of the Old World.