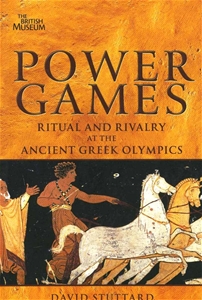 Power Games Rıtual and Rivarly At The Ancient Greek Olympics

Power; the power of the gods; the power of Greek cities; the power of the human body: all these were celebrated at the ancient Olympic Games. Ancient Olympia symbolized excellence and supremacy in every sense of the word, not only athletic, but also political. Every four years, this international festival carefully timed to coincide with the August full moon drew the strongest and fastest athletic champions, hoping to win glory for their city-state. With them came the ruling elite, equally intent on displaying their citys power and prestige by excelling at the Games. After the athletic contests, Olympia also served as the ideal forum for political parleys and alliances. This absorbing narrative, told from a spectators viewpoint, revolves around the Games of 416 BC a turning point in Greek politics when a cold war between Athens and other major cities was about to erupt into bloody fighting. The reader vividly experiences what it was like to be there, to witness the rituals, official banquets, bloody contests, victory celebrations and subsequent political parleys.