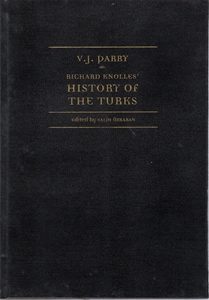 Richard Knolles History Of The Turks

In the 1950 os, SOAS Ottoman historian V.J. Parry, best known for his work on Ottoman weapons and explosives technologys, embarked on a doctoral disstertation which was to be an evaluation and presentation of Richard Knolles' famous Generall Historie of the Turkes (1603) . Yet Parry's manuscript, a fundamental companion to that early text, remained undiscovered until his death.

Embellished with numeros anecdotes illurating the ruthlessnoess and exotic splendor of this Eastern people. Turkish critic Orhan Burian notes that Knolles' Generall Historie is 'one of the earliest histories to be written in the English language, ' and has been praised as 'a monument of Elizabethan prose by several dizcerning judges, ' including Samuel Johnson and Lord Byron. Byron admitted that the work 'had much influence' on his future wishes to visit the Levant, and 'gave perhaps the Oriental coloring' observed in his poetry According to V.J. Pary, 'if we look forward from 1603, we shall encounter, on this subject, no monument of historical writing whisch can vie with Knolles, until we reach the famous Geschichte des Osmanischen Reiches of von Hammer, well over two hundred years more recent in date. In the narrower field of English historical literature. Knolles remains without atrue rival, for his book is still, despite its limitations, the most exhaustive that we have, a vast repository of much that we prize most higly amongst the sources fot the rise and full resplendence of the Ottoman might.'

After waiting nearly half a century until after his death, and although incomplete, Parry's Richard Knolles' History of the earlistTurks has now been edited by historian Salih Özbaran, thus offering us Parry's insights into this unique document on Ottoman life and history.