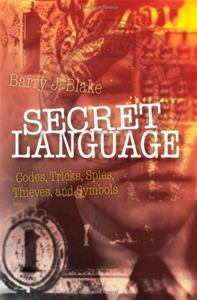 Ciphers and codes conceal messages and protect secrets; symbols and runes contain hidden or ancient meanings; and languages made to baffle and confuse the uninitiated let insiders talk openly without risk of being heard by others. In this in-depth yet entertaining book, linguistics professor Barry Blake employs riddles and puzzles to examine many forms of meaning in disguise. He explores the history and uses of the slangs and argots of schools and trades and traces centuries-old cants like those used by sailors and criminals—among them Polari, the mix of Italian, Yiddish, and slang spoken once among strolling players and circus folk and then taken up by gays in 20th-century London. Blake also examines the sacred languages of ancient cults and religions; uncovers the workings of onomancy, spells, and gematria; considers the obliqueness of allusion and parody; and celebrates the absurdities of euphemism and jargon."What we have here is a wonderful weekend read, a serious wolf of a book about linguistics wrapped in the sheep's clothing of frisky pleasure in the originality and versatility of words."