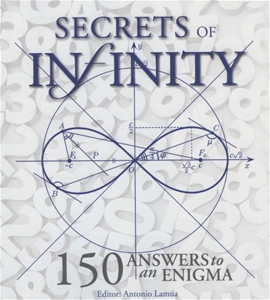 Secrets of Infinity: 150 Answers to an Enigma

The concept of infinity is a highly complex enigma, and its meaning has been considered by many disparate approaches. Thus the best method to elucidate the topic for the general reader is to explore infinity as it is studied by particular fields, including science, mathematics, technology, art, philosophy and symbology.

One useful starting point, one we find at the heart of any discussion of infinity, is the notion that what is infinite is never-ending, although beyond that starting point the arguments and ideas diverge in seemingly endless ways.

In antiquity, the idea of infiinity was studied by classical philosophers from Greece and Rome, such as Zeno of Elea, Parmenides, Archimedes and Pythagoras. Aristotle was the primary figure who, around 350 BC, established a school of thought regarding infinity that would be further articulated by succeeding scholars.

One of Aristotle's greatest contributions to the study of infinity was the idea that "The whole is greater than the sum of its parts." In more recent times, mathematician Georg Cantor used set theory to further explore this concept, now known as Cantor's Theorem.

Yet no single theorem or thinker has proven capable of forming a "complete" vision of infinity. Analysis of multiple approaches from varied sources is necessary to begin to capture its true scope.

This book offers 150 different angles from which to consider the unresolved enigma that is infinity. And though the discussion remains unresolved, this exploration is sure to be illuminating.