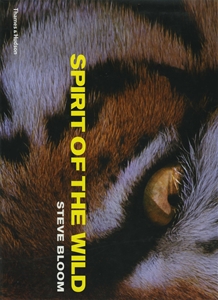 Spirit of the Wild

These unforgettable images will astonish and inform anyone who sees them as the full force of man’s environmental destruction of the planet and its creatures is revealed.

Steve Bloom's goal has been to search for the spirit of the world’s wildlife: the tiger’s eyes gleaming brightly in the jungles of India; polar bear cubs seeing the world for the first time; the few mountain gorillas left in Africa. The result is a perpetual dance for the eye which reveals not only the animals but much that is new to us about ourselves.

Accompanied by his own commentaries, as passionate as they are informed, and thought-provoking quotes from legendary figures such as Mahatma Gandhi, Gerald Durrell and Emily Dickinson, Spirit of the Wild brings to the fore the common experiences of all living beings.

Steve Bloom, born in South Africa, is a bestselling photographer of the natural world. He is the author of several books, including Elephant! and Untamed, which was described by Outdoor Photography Magazine as ‘the best case yet for the defence of the earth.’