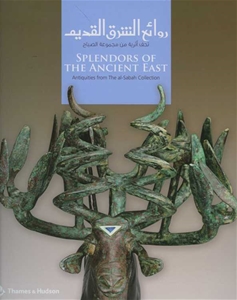 Splendors of the Ancient East

This selection is united by the personal vision of Sheikh Nasser Sabah al-Ahmad al-Sabah and his wife, Sheikha Hussah Sabah al-Salem al-Sabah. This vision is informed by a love of the beauty of these objects and an interest in the material culture of this region, from which grew some of the distinctive forms and design vocabulary of Islamic art.

Covering some 4,000 years, from the Bronze Age up to the dawn of the Islamic era, this book celebrates some of the beautiful objects created in the Near East and beyond, including Central and South Asia.

• Illustrates one hundred of the most beautiful and important ancient objects in the al-Sabah Collection, most published here for the first time
• Includes essays by five of the most prominent scholars in their fields
• Reproduces important bronzes, silverware and jewelry, ranging from Early Dynastic Mesopotamian offering stands, South Arabian figural sculptures and a large figure of a Sasanian lady, to a beaker formerly owned by the Assyrian king Esarhaddon, a gold scorpion necklace, and Hellenistic-period intaglios and cameos