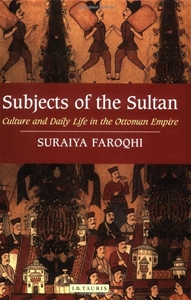 Subjects of the Sultan : Culture and Daily Life in the Ottoman Empire

The cultural heritage of the Ottoman Empire has traditionally been presented to us through its monuments and high arts. Our understanding of its culture has thus come from a world created by and for sultans, viziers and the elite of the Empire. But what of the world of the craftsmen and tradesmen who produced the monuments and artefacts? Or the townspeople who prayed in the mosques, drank water from the sebils or passed by the mausolea in the ordinary course of their lives? How did they live and die? To date no book has adequately explored the day-to-day life of the common people during the centuries of Ottoman rule. In this new edition Faroqhi explores the urban world of the Ottoman lands from the Middle Ages to the early 20th century, describing the social significance of the popular arts and crafts of the period and examining the interaction among the diverse populations and classes of the Empire.