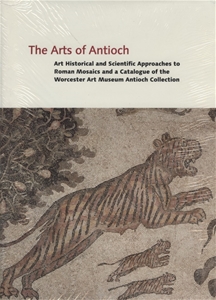 The Arts of Antioch: Art Historical and Scientific Approaches to Roman Mosaics and a Catalogue of the Worcester Art Museum Antioch Collection

This book features the first comprehensive interdisciplinary study of the mosaics from Antioch, one of the four capitals of the Roman and Early Christian world. A follow-up to the critically acclaimedAntioch: The Lost Ancient Cityby Christine Kondoleon, this volume includes the latest scholarly and scientific discoveries that grew out of the Antioch exhibition. For the first time, the research of art historians and archaeologists is combined with that of conservators and scientists to shed new light on mosaic and glass workshops.

The authors take an in-depth look at the Antioch excavations, which yielded a range of mosaics, sculpture, and glass- and metalwork spanning four centuries. They also explore the development of mosaic conservation in museums since the 1930s. Included are recent findings on mosaic materials, artistic techniques, glassmaking technology, stone quarries, workshops, trade, and patronage.

An introduction by the director of the Worcester Art Museum outlines the history of the museum's involvement with the excavations of Antioch, and gives insight into several personalities who were key to the realization of the project. The catalogue section offers detailed information regarding the archaeological context, art historical significance, and technical study of over 150 objects, including the finest group of Roman and Early Byzantine mosaics in North America, and a chronological series of 106 coins from Antioch. With 400 photographs and illustrations,The Arts of Antiochprovides a new basis for future scientific and art historical study.