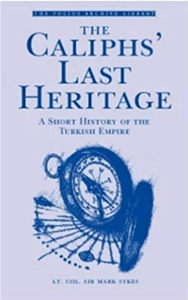 The Caliphs' Last Heritage: A Short History of the Turkish Empire

In this book, Lt. Col. Sir Mark Sykes sets out to correct what he felt were the misguided impressions people had of the Ottoman Empire in 1915. From his own visits to the region, he felt that "there is nothing in our daily private life or public life today which is not directly or indirectly influenced by some human movement that took place in this zone". He firstly discusses different periods from its history: from the Roman and Persian influence to that of Muhammad and the introduction of Islam, to Sulaiman the Magnificent's triumph in Baghdad. In this way, Sykes hopes to impart to the reader the extent of the important role played by the Empire through time. The tone then changes and becomes more personal as the reader is granted access to the Colonel's own diaries and experiences in order to add more color and insight to the historical facts already relayed. Traveling with his dragoman (a Christian from Jerusalem), his English servant, his Greek cook, five Syrian muleteers, and sometimes his wife too, Sykes relates the many adventures of this international group in a wonderfully observant narrative. We travel with him on 5 journeys throughout the region between 1905-1913 before finally tumbling into "a lousy carriage an inch deep on the floor in banana skins and nut shells, and broken meats left by its last occupants; and so to Damascus and thus to my journey's end." This really is a window on a forgotten era.