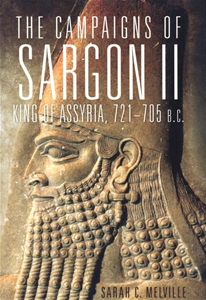 Backed by an unparalleled military force, Sargon II outwitted and outfought powerful competitors to extend Assyrian territory and secure his throne. As Sarah C. Melville shows through a detailed analysis of each of his campaigns, the king used his army not just to conquer but also to ensure regional security, manage his empire’s resources, and support his political agenda. Under his leadership, skilled chariotry, cavalry, and infantry excelled in all types of terrain against an array of culturally diverse enemies.

This book represents the first in-depth military study of the great Assyrian king. Drawing extensively from original sources, including cuneiform inscriptions, the letters of Sargon and his officials, archival documents, and monumental art, Melville presents Sargon’s achievements as king, diplomat, and conqueror. Contrary to the stereotype of the brutal Assyrian despot, Sargon applied force selectively, with deliberate economy, and as only one of several possible ways to deal with external threat or to exploit opportunity.

The Campaigns of Sargon IIdemonstrates how Sargon changed the geopolitical dynamics in the Near East, inspired a period of cultural florescence, established long-lasting Assyrian supremacy, and became one of the most influential kings of the ancient world.