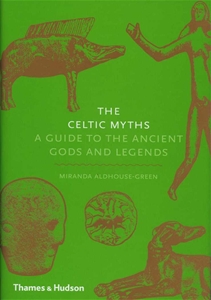 The Celtic Myths A Guide to the Ancient Gods and Legends

The Celtic Myths is accessible for readers new to Celtic mythology, but satisfyingly detailed in its analysis of contexts, cultures and archaeology for those well versed in the stories.

Written down in medieval Wales and Ireland, the legends derive from oral poetry composed many centuries earlier. The Celts who shared these myths left behind treasures and monuments that predate the written texts but are closely connected with them. Miranda Aldhouse-Green skilfully weaves together evidence from manuscripts, artefacts and inscriptions to explore the world of the Celts and their mythology.

You will meet the supernatural cast of Celtic lore: the Irish warrior, Cú Chulainn, whose prodigious strength as a child foreshadowed his heroic life; the Welsh lovers Culhwch and Olwen whose long and happy marriage was won only by Culhwch’s Herculean feats; the tragic Lleu who was betrayed by his wife and lover; and King Arthur and his knights’ quest for the Holy Grail.

First discussing how myths are transmitted, the book recounts the Irish and Welsh myths and their key actors and motifs, before considering themes such as heroes, animals, women, environment and the Otherworld. In the Finale, Miranda Aldhouse-Green asks how the myths survived the Christianization of Europe and looks at the influence of monastic chroniclers on the tales, which they preserved and adapted.

Miranda Aldhouse-Green is Professor Emeritus at Cardiff University. She specializes in the study of shamanism and archaeology of the Iron Age. She has published widely on the Celts and their world, including: Celtic Goddesses: Warriors, Virgins and Mothers, Dictionary of Celtic Myth and Legend, andExploring the World of the Druids.