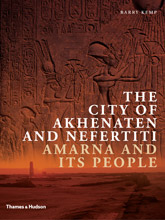 The City of Akhenaten and Nefertiti

A city of temples, palaces, offices and elite tombs, and simultaneously a city of small-scale mud-brick dwellings, Amarna was an ‘urban village’, where most of its citizens were only two or three steps removed in the social scale from the king himself. Barry Kemp evokes the sights and smells of Amarna, bringing to life its people – not only the royal family, but also prominent citizens such as the high priest Panehsy, the vizier Nakht, the general Ramose and the sculptor Thutmose, whose bust of Nefertiti is one of  the masterpieces of ancient art.

Although Akhenaten had overturned the old religion and introduced worship of the Aten, the sun’s disk, beneath the surface the old belief in the traditional Egyptian gods continued. Likewise themes of abundance and prosperity depicted in the art are contradicted by new cemetery evidence showing malnutrition in childhood, skeletal injuries and early death.

Insights such as these, together with the beautiful and abundant illustrations, make this volume essential reading for anyone interested in the history of urbanism, the mysterious Amarna interlude, and the enigmatic Akhenaten and Nefertiti, who have fascinated writers as diverse as Sigmund Freud and Noel Coward.