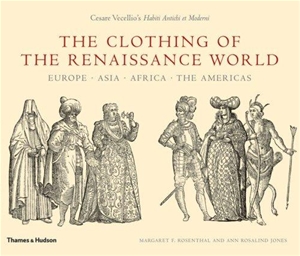 The Clothing of the Renaissance World

This new edition features all the original text and woodcuts, as well as the New World entries, preserving the charming layout of the original.

Packed with fascinating images, as well as enchanting (and often amusing) descriptions of the costume and habits of the peoples of the world as seen in the late 16th century, this book will appeal to all those interested in the history of dress, travel, antiquarian books, Renaissance art and cultural history.

The original publication was aimed in part at artists who might use it as a pattern book (Vecellio had himself trained with his cousin the painter Titian), but its appeal soon proved more widespread, not least because the book recognized that clothing, as well as acting as an identifier of rank, was also ‘fashion’ – constantly changing, crossing borders and transforming the way people lived.

After a brief history of dress in Ancient Rome, the book first concentrates on the clothing of Italy, before extending its scope to Europe and beyond. It describes in captivating detail the dress and customs of the inhabitants, from the loftiest rulers down to gravediggers, beggars and orphans, and stretches to the farthest reaches of Japan, China, Africa and India. A second, extended edition, published in 1598, added the New World of the Americas.

This outstanding feat of scholarship is accompanied by an in-depth illustrated introduction by the translators, two of the foremost authorities on Italian literature and dress of the time, as well as an illustrated glossary of terms.