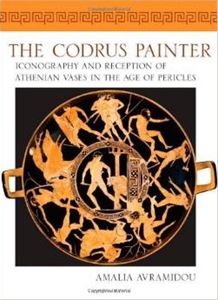 The Codrus Painter: Iconography and Reception of Athenian Vases in the Age of Pericles

The Codrus Painter was a painter of cups and vases in fifth-century B.C.E. Athens with a distinctive style; he is named after Codrus, a legendary Athenian king depicted on one of his most characteristic vases. He was active as an artist during the rule of Pericles, as the Parthenon was built and then as the troubled times of the Peloponnesian War began. In contrast to the work of fellow artists of his day, the vases of the Codrus Painter appear to have been created almost exclusively for export to markets outside Athens and Greece, especially to the Etruscans in central Italy and to points further west. Amalia Avramidou offers a thoroughly researched, amply illustrated study of the Codrus Painter that also comments on the mythology, religion, arts, athletics, and daily life of Greece depicted on his vases. She evaluates his style and the defining characteristics of his own hand and of the minor painters associated with him. Examining the subject matter, figure types, and motifs on the vases, she compares them with sculptural works produced during the same period. Avramidou’s iconographic analysis not only encompasses the cultural milieu of the Athenian metropolis, but also offers an original and intriguing perspective on the adoption, meaning, and use of imported Attic vases among the Etruscans.