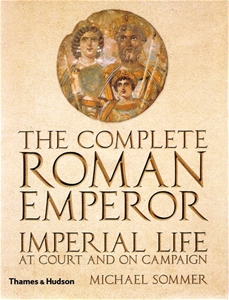 The Complete Roman Emperor Imperial Life - at Court and on Campaign

What do we really know about the behind-the-scenes daily lives of the Roman emperors? What were their relationships like with wives, officials and the military?
Vespasian started work before dawn, while Constantine read the Bible. Morning audiences might be followed by an afternoon spent  on correspondence or with concubines (Vespasian) and a lavish evening dinner (Nero showered his guests with flowers and perfume). Soldier-emperors such as Trajan, or Septimius Severus, who marched huge distances with his legions, are contrasted with dissolute rulers such as Nero, said never to travel without a retinue of  100 coaches.
Michael Sommer writes vividly about the individuals, from Augustus onwards, who shaped the job of Roman emperor. Thematic chapters range from the foundation of the empire and the different paths to power to building projects in Rome and Constantinople and the emperors on campaign.
The imperial role changed over the centuries, from the original concept of ‘first among equals’ to the soldier-emperors of the 3rd century, the aloof figures of Constantine’s era, and finally the ‘shadow emperors’ of Rome’s decline and fall.
Supplemented by many quotations from ancient sources, features and anextensive reference section including biographies of all the emperors, this beautifully illustrated volume gives a comprehensive picture of the Roman emperor and his world.