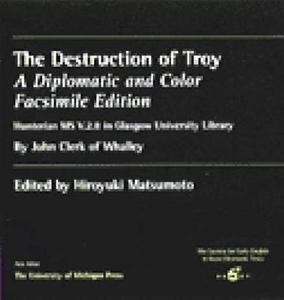 The Destruction of Troy : A Diplomatic and Color Facsimile Edition

Yayınevi: The University of Michigan Press

The Destruction of Troy is one of the most important of the poems of the late fourteenth-century Alliterative Revival. At over 14,000 lines, it is the longest alliterative poem in English. Though the work of a literate poet, John Clerk of Whalley, who translated, often literally, from the Latin text of the Historia Destructionis Troiae by Guido delle Colonne, its ties to late medieval oral-aural modes of formulaic composition make it a gold mine for students of late medieval vernacular romance narratology.
Once condemned by its few readers for the regularity of its alliterative and metrical patterning, the single manuscript of The Destruction of Troy can now be recognized as one of the best and most faithfully preserved witnesses -- in spite of its late date (c. 1540) -- to the late fourteenth-century original. Hiroyuki Matsumoto's faithful rendering of the manuscript marks a substantial advance in our ability to understand and study this romance, correcting the many mistranscriptions and miscomprehensions of the turn-of-the century gentlemen scholars who produced the only printed edition.
Electronic texts offer unprecedented advantages to historians, literary critics, linguists, and editors. Unlike earlier, printed critical texts, the electronic text lends itself to sophisticated searches, concordancing, and other forms of text retrieval and manipulation. Scholars interested in stylistic analysis are enabled to make fuller and more complete studies of metrical, lexical, or syntactic patterning than have been possible with printed texts.
This electronic edition supplies full-color facsimiles of the manuscript and allows complex searches and manipulations of the text through use of the underlying SGML-encoding. This project conforms fully to the 1994 Text Encoding Initiative guidelines.
Hiroyuki Matsumoto is Professor of English at the Department of General Education, Toyota Technological Institute.
Minimum System Requirements
Windows 95 or higher
80486 processor with 32 MB of RAM
Color monitor capable of 256 colors and resolution of 800x600