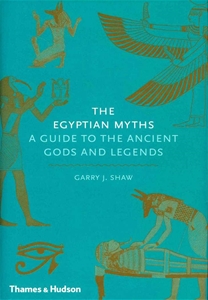 The Egyptian Myths A Guide To The Ancient Gods And Legends

• The first deities – Amun-Re, king of the gods, Ptah, divine craftsman, and Atum, Lord of Totality – and how they created the world
• Legends of rebellion against the sun god and Geb’s search for the magical wig of Re
• The murder of Osiris and Horus’ triumph over Seth
• Powerful goddesses, such as Isis, Maat, Mut and Neith
• Ghost stories, and the demonic denizens of the afterlife realm, such as Ammit, devourer of souls
• The weighing of the heart during Osiris’ judgment
• Informative sections on the post-pharaonic influence of Egyptian myths

Which gods created the world according to the ancient Egyptians? How did they explain the sun’s movements and its disappearance at night? In what ways did mythology permeate their lives? And what did they believe happened in the afterlife? The book explains how the Egyptians encountered the mythological in their everyday lives: gods, goddesses, ghosts and demons, beings that could be aggressive, helpful, wise or dangerous, all were prominent in Egyptian myth and legend.