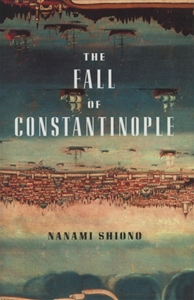 The Fall of Constantinople

The Roman Empire did not meet its end when barbarians sacked the City of Seven Hills, but rather a thousand years later with the fall of Constantinople, capital of the surviving Eastern Empire. The Ottoman Turks who conquered the city also known to us as Byzantium (and of course Istanbul) would force a tense century of conflict in the Mediterranean culminating in the famous Battle of Lepanto. The first book in a triptych depicting this monumental confrontation between a Muslim empire and Christendom, The Fall of Constantinople brilliantly captures a defining moment in the two creeds' history too often eclipsed by the Crusades.

A unique masterpiece of narrative history that no appreciator of that great tradition should want to miss, Nanami Shiono's telling of the event draws on novelistic techniques as well as on the ample and credible Venetian source material to situate the reader within the triple walls of the besieged city and among the elite Janissaries marching upon them. The political passions, economic interests, and military tactics that decided the outcome are brought together here in a compulsively readable work that is a gift to all history junkies.