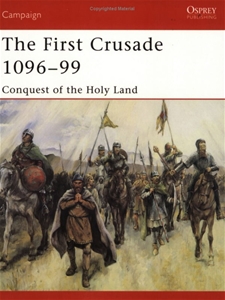 In 1095 the Byzantine Emperor Alexios I appealed to the Christian states of western Europe for help against the Turks who had swept across the Empire after the disastrous Byzantine defeat at Manzikert in 1071. This book is about the First Crusade (1096-1099) that followed, and saw several armies of ‘armed pilgrims’ march across Europe to the Holy Land. They were unleashed on a divided and fragmented Islamic world and won a series of apparently miraculous victories, capturing the Holy City of Jerusalem itself. The success of the First Crusade was never to be repeated, however, and triggered two centuries of bitter warfare, the repercussions of which are still felt today.