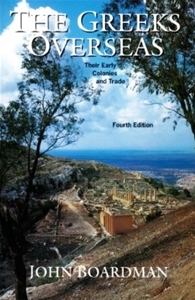 The Greeks Overseas - Their Early Colonies and Trade

The spread of Greek civilization through Europe, into Africa and the Near East, began long before the Classical period, long after Troy, Mycenae and Knossos had fallen.
This classic study gives the archaeologist’s view of one of the most important periods of European history, describing how, out of the Dark Ages, the Greeks set their sails north, south, east and west to plant trading posts and colonies, to reap whatever harvest of materials and expertise they could find, and to disseminate the benefits of their own rapidly developing and brilliant civilization.
The canvas is broad — Greek mercenaries leaving graffiti on the statues of Abel Simbel in southern Egypt; Greek traders braving the Atlantic breakers or introducing wine to Burgundy. The Greeks Overseas vividly demonstrates the value of archaeology to the historical record, and indicates how much the arts and culture of Classical Greece already owed to foreign influences.
For the fourth revised edition of this book, an additional chapter has been added summarizing new finds and exploring the new attitudes that have affected the study of the subject.