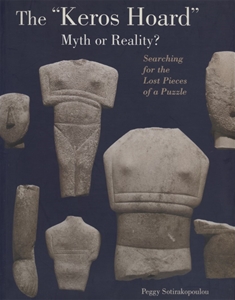 The "Keros Hoard" Myth or Reality? Searching for the Lost Pieces of a Puzzle

Keros is a small, mountainous, and now-deserted island situated between Naxos, Amorgos, and Ios in the southeast Cyclades. Keros became widely known after a series of extensive and clandestine excavations in the 1950s and early 1960s, which concentrated on a particularly rich deposit of material at the site of Kavos, situated at its barren western extremity. These major lootings resulted in the illegal export from Greece of a large number of Early Cycladic objects - mostly fragmentary marble figurines - that flooded the international antiquities market under the general name the Keros Hoard. The cache was said to have included at least 350 Cycladic objects and is now widely dispersed. This study features a review of the archaeological investigations on Keros; a discussion of the so-called Keros Hoard; an extensive account of the various aspects of Cycladic figurines; and a catalogue of the objects identified as coming from the Hoard. Also included are an analysis of the data derived form the Hoard, the results of the study comparing the fragments in the Museum of Cycladic Art with those discovered at Kavos during official archaeological investigations; an interpretation of the Ho