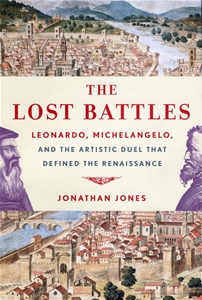 The Lost Battles: Leonardo, Michelangelo, and the Artistic Duel That Defined the Renaissance

From one of Britain’s most respected and acclaimed art historians, art critic ofTheGuardian—the galvanizing story of a sixteenth-century clash of titans, the two greatest minds of the Renaissance, working side by side in the same room in a fierce competition: the master Leonardo da Vinci, commissioned by the Florentine Republic to paint a narrative fresco depicting a famous military victory on a wall of the newly built Great Council Hall in the Palazzo Vecchio, and his implacable young rival, the thirty-year-old Michelangelo.We see Leonardo, having just completedThe Last Supper,and being celebrated by all of Florence for his miraculous portrait of the wife of a textile manufacturer. That painting—theMona Lisa—being called the most lifelike anyone had ever seen yet, more divine than human, was captivating the entire Florentine Republic.And Michelangelo, completing a commissioned statue of David, the first colossus of the Renaissance, the archetype hero for the Republic epitomizing the triumph of the weak over the strong, helping to reshape the public identity of the city of Florence and conquer its heart.InThe Lost Battles, published in England to great acclaim (“Superb”—The Observer;“Beguilingly written”—The Guardian), Jonathan Jones brilliantly sets the scene of the time—the politics; the world of art and artisans; and the shifting, agitated cultural landscape.