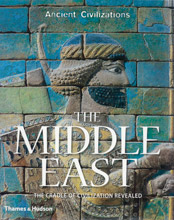 The Middle East - The Cradle of Civilization Revealed

Today, the politically volatile Middle East sits above two-thirds of the planet’s oil reserves and holds our attention as never before. However, the ancient Middle East was just as important to the world of its day, for it was here that the first permanent settlements took root, and the first complex societies emerged onto the world stage.

These cultures produced the earliest agriculture, metalworking and writing systems, as well as the earliest centralized governments and legal systems, priesthoods and kings, and large-scale organized warfare.

The Middle East: The Cradle of Civilization Revealed synthesizes the latest research and information from a range of disciplines to tell the compelling story, from the Neolithic period through the Arab conquest, of how a group of linguistically disparate, nomadic tribes responded to specific social, economic and environmental factors to form the world’s first complex societies.

Compiled by an international team of historians, linguists and archaeologists.