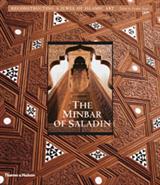 The Minbar of Saladin Reconstructing a Jewel of Islamic Art

Made in the middle of the 12th century, this wooden pulpit, perhaps the finest ever seen, stood in the al-Aqsa Mosque in Jerusalem for some eight hundred years until it was burned down in 1969 by a tourist claiming to be acting on orders from God. Its loss to the Muslim world was immense and so the decision was taken by the mosque's guardians, the Jordanian royal family to rebuild it.
Nobody, however, could have guessed just how complicated the process would be, nor how long it would take. With the secrets of the original construction all but lost, to rebuild the Minbar of Saladin required not only the unravelling of its astonishingly complex geometry, but also the revival of almost extinct crafts. The solutions to these problems were often to be found in unexpected places, and involved scholars and craftsmen from around the world.
This book, which accompanies the television film 'Stairway to Heaven', is the first to document the minbar's creation, destruction and reconstruction. However, it is also a meditation on the beauty of sacred art and the fragility of our cultural heritage. Packed with fascinating images, both of the minbar itself and of other key works, it will appeal to all those interested in Islamic art, sacred geometry, the history of the Holy Land, and the revival of traditional crafts.