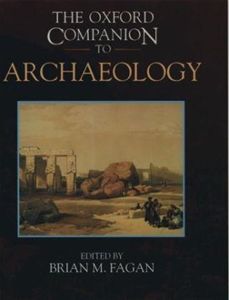 The Oxford Companion to Archaeology

When we think of archaeology, most of us think first of its many spectacular finds: the legendary city of Troy, Tutankhamun's golden tomb, the three-million-year-old footprints at Laetoli, the mile-high city at Machu Picchu, the cave paintings at Lascaux. But as marvelous as these discoveries are, the ultimate goal of archaeology, and of archaeologists, is something far more ambitious. Indeed, it is one of humanity's great quests: to recapture and understand our
human past, across vast stretches of time, as it was lived in every corner of the globe. Now, in The Oxford Companion to Archaeology, readers have a comprehensive and authoritative overview of this fascinating discipline, in a book that is itself a rare find, a treasure of up-to-date information on
virtually every aspect of the field.
The range of subjects covered here is breathtaking - everything from the domestication of the camel, to Egyptian hieroglyphics, to luminescence dating, to the Mayan calendar, to Koobi Fora and Olduvai Gorge. Readers will find extensive essays that illuminate the full history of archaeology - from the discovery of Herculaneum in 1783, to the recent finding of the `Ice Man' and the ancient city of Uruk - and engaging biographies of the great figures in the field, from Gertrude Bell, Paul Emile
Botta, and Louis and Mary Leakey, to V. Gordon Childe, Li Chi, Heinrich Schliemann, and Max Uhle. The Companion offers extensive coverage of the methods used in archaeological research, revealing how archaeologists find sites (remote sensing, aerial photography, ground survey), how they map
excavations and report findings, and how they analyse artifacts (radiocarbon dating, dendrochronology, stratigraphy, mortuary analysis). Of course, archaeology's great subject is humanity and human culture, and there are broad essays that examine human evolution - ranging from our early primate ancestors, to Australopithecus and Cro-Magnon, to Homo Erectus and Neanderthals - and explore the many general facets of culture, from art and architecture, to arms and armour, to beer and brewing, to
astronomy and religion. And perhaps most important, the contributors provide insightful coverage of human culture as it has been expressed in every region of the world. Here entries range from broad overviews, to treatments of particular themes, to discussions of peoples, societies, and particular
sites. Thus, anyone interested in North America would find articles that cover the continent from the Arctic to the Eastern woodlands to the Northwest Coast, that discuss the Iroquois and Algonquian cultures, the hunters of the North American plains, and the Norse in North America, and that describe sites such as Mesa Verde, Meadowcraft Rockshelter, Serpent Mound, and Poverty Point. Likewise, the coverage of Europe runs from the Paleolithic period, to the Bronze and Iron Age, to the Post-Roman
era, looks at peoples such as the Celts, the Germans, the Vikings, and the Slavs, and describes sites at Altamira, Pompeii, Stonehenge, Terra Amata, and dozens of other locales. The Companion offers equally thorough coverage of Africa, Europe, North America, Mesoamerica, South America, Asia, the
Mediterranean, the Near East, Australia and the Pacific. And finally, the editors have included extensive cross-referencing and thorough indexing, enabling the reader to pursue topics of interest with ease; charts and maps providing additional information; and bibliographies after most entries directing readers to the best sources for further study.

Every Oxford Companion aspires to be the definitive overview of a field of study at a particular moment of time. This superb volume is no exception.