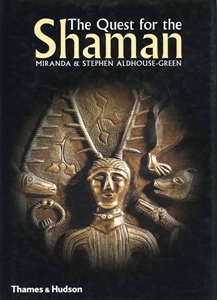 The Quest for the Shaman

Long before there were organized religions there were shamans.
Archaeological remains show that shamanism was endemic among ancient European peoples from the Stone Age to the early post-Roman era. The authors draw on recent research in their quest for the shaman and support their conclusions with rich evidence.
Miranda Aldhouse-Green’s interests lie in the ritual behaviour and practices of later prehistory, the Classical world, and the early mythic literature of Ireland and Wales. Stephen Aldhouse-Green’s expertise lies in much earlier prehistory. Here their specialties come together to produce an exciting, innovative study of ancient European religious practice and practitioners.
Miranda Aldhouse-Green is Professor of Archaeology and Head of Research in the School of Humanities at the University of Wales, Newport. Her many books include Dictionary of Celtic Myth and Legend and Exploring the World of the Druids, both published by Thames & Hudson. Stephen Aldhouse-Green is Professor of Human Origins, University of Wales, Newport, and the author or co-author of Prehistoric Wales, Paviland Cave and the ‘Red Lady’, Ice Age Hunters and Pontnewydd Cave.