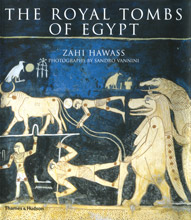 The Royal Tombs of Egypt

It was in the Valley of the Kings that Howard Carter stumbled upon the virtually intact tomb of the boy-king, Tutankhamun, igniting a worldwide Egyptomania that
has lasted to this day.
The royal tombs, tunnelled deep into the Theban cliffs, represented both the gates to the Netherworld and the womb of the Great Goddess. Many of them contain outstanding wall paintings of the king with various gods and goddesses, as well as papyri, mummies, decorated coffins and other artifacts.
This is the first book to reproduce these wall paintings and murals in full, and to explore the meanings of the esoteric and arcane Netherworld Books that decorated the royal tombs. The images are accompanied by in-depth analyses of the most deeply held beliefs of the ancient kings and queens who lay there, beliefs that provided the impetus for the building, decoration and equipping of these magnificent tombs.
Beautifully illustrated in full colour, with thirty foldouts, this sumptuous volume will enable you to join the pharaohs of the New Kingdom on their journeys to immortality.