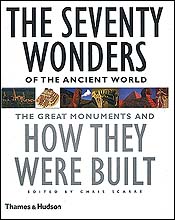 The Seventy Wonders of the Ancient World

The Seventy Wonders of the Ancient World expands on the traditional Seven Wonders to incorporate an impressive number of marvels from around the globe, spanning the centuries from the first standing stones of the fifth millennium BC to the Great Temple of the Aztecs in the sixteenth century AD.

The shaping of the Great Sphinx at Giza, the raising of the stones at Stonehenge, The laying out of the Nazca Lines on the face of the Peruvian desert, and the construction of the Great Wall of China are all described and explained by an international team of experts in the light of the most recent archaeological research.

Packed with factfiles, diagrams, photographs and specially commissioned perspective views, this is a testament to the skill of the ancient architects and engineers which continue to impress successive generations down the ages.