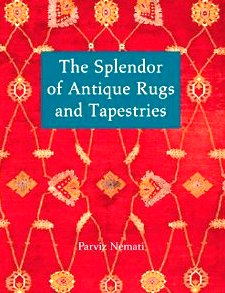 The Splendor of Antique Rugs and Tapestries

Parviz Nemati, a collector and expert in Oriental rugs and textiles for over forty years, is an established New York City dealer. Raised in a family of educators, collectors, and dealers in Oriental rugs, he grew up among the weavers of Kerman, one of the most ancient and famous rug centers of Iran. Having pursued his business education in the United States, he is now the proprietor of The Nemati Collection, an exclusive gallery in New York City specializing in antique rugs and tapestries. Mr. Nemati also acts as an appraiser and consultant to museums and private collectors and has served as the principal exhibitor for several major cultural events, most notably, the Heritage of the Middle East, which appeared at the Museum of the Philadelphia Civic Center, and the traveling exhibit, Shawls and Textiles of the East. He is also the author of Rugs as an Investment (Agate Press, 1980).