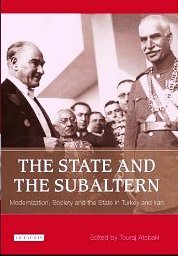 The State and the Subaltern: Modernization, Society and the State in Turkey and Iran

In the 1920s Turkey and Iran faced political upheaval as both states attempted to find their routes to modernity. This is the first study to observe the practice of modernization in Turkey and Iran not only from above, by examining the measures adopted by the political regimes of the late Ottomans, Ataturk and Reza Shah, but also from below, exploring how different social levels contributed to the drive for modernity. It is a full and thorough analysis of how these societies reacted to reform and change. "The State and the Subaltern" offers a fresh perspective on the accommodation and resistance to modernization and the relation between the common people and the state in two Islamic societies during the 19th and early 20th centuries. It is a fascinating exploration of the history of subalterns - the rank and file of society - with specific reference to gender, ethnicity, industrial and non-industrial urban labour, rural labour, unemployment and the impact of immigrant labour.