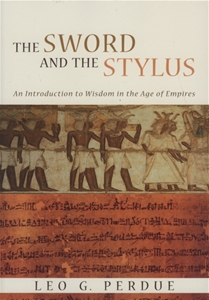 The Sword and the Stylus: An Introduction to Wisdom in the Age of Empires

Journal of the Evangelical Theological Society

"Perdue has crafted a masterful introduction to wisdom literature, designed especially for use on the seminary and graduate level."

John J. Collins
— Yale Divinity School
"Wisdom literature is often perceived as timeless. Leo Perdue shatters that illusion by setting the major texts of biblical and ancient Jewish wisdom in their social and historical context. This is the first properly historical introduction to the wisdom tradition, from ancient Egypt to Qumran. A splendid textbook."

Katharine J. Dell
— University of Cambridge
"In this volume Leo Perdue opens our eyes to the sheer variety of sapiential material that has shaped successive cultures and worldviews. His chronological grounding of Israelite wisdom from within and outside the canon in the history and culture of the major empires that surrounded her shows us the true extent of the cross-fertilization of ideas and social institutions. . . An ambitious, judicious, and significant new introduction to the wisdom literature grounded in the reality of power struggles between nations and highlighting the power of the scribal pen in the midst of historical chance and circumstance."

Dianne Bergant, CSA
— Catholic Theological Union
"Leo Perdue has marshaled a treasure trove of relevant resources in this extraordinary study of the wisdom literature of ancient Israel. Locating each of the biblical books belonging to this tradition within one of the major empires of the ancient world, he shows how the teaching of that book reflects the historical-political currents of the period. This is one of the most comprehensive studies of the material that has appeared in some time."

Marvin A. Sweeney
— Claremont School of Theology and Claremont Graduate University
"Perdue's magisterial study demonstrates the social dimensions of the wisdom literature of the Hebrew Bible, ancient Judaism, and the ancient Near Eastern world. Interpreters may no longer view the wisdom literature as idle speculation isolated from the realities of the world at large."

Review of Biblical Literature
“This book constitutes a major contribution to the study of Israelite and Jewish wisdom literature. . . . I applaud and admire Perdue for what he has accomplished in this book. It will no doubt become a standard work on ancient wisdom traditions and their social worlds.”

Society for Old Testament Study Booklist
“The scope of [Perdue’s] work is impressive and he presents an immense amount of valuable background detail on each of the wisdom writings so that the reader is presented with a veritable feast of material for illuminating these works.”

Interpretation
“The scope and complexity of this volume is impressive. Perdue navigates a stunning amount of material, and moves adroitly between texts, cultures, and historical periods. . . . Perdue is to be commended for this significant achievement.”

Expository Times
“This is another impressive volume from Perdue’s pen and deserves to be widely read and used.”