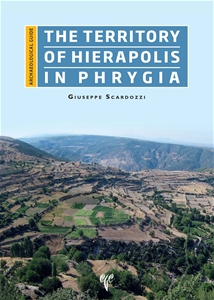 The Territory of Hierapolis in Phrygia

The aim of the archaeological guide to the territory of Hierapolisin Phrygia (Pamukkale) is to present the results of the research conducted by the Italian Archaeological Mission since 2005. Thisresearch has sought to reconstruct the pattern of settlement inthis area from Prehistory to the Byzantine epoch and to draw anarchaeological map. The investigated area includes the northernside of the valley of the river Lykos(the current Çürüksu), whereHierapolis was located, and the plateau of Uzunpınar, delimited tothe north by the course of the river Maeander. The research hasalso covered part of the nearby plateau of Çal, which might havefallen within the territory administered by Hierapolis, at least duringthe mid-Imperial period. After presenting the main archaeologicalevidence regarding the period before the foundation of Hierapolis,chronologically corresponding to the period from the Bronze Age tothe Phrygian epoch, the volume provides a detailed description ofthe organisation of the chora of Hierapolis from the Hellenistic tothe Byzantine periods, including the extensive quarries (of marble,travertine, alabaster and polychromatic breccia), the aqueducts thatsupplied the city, the ancient road network, the sacred areas, andthe farms and villages with their relative necropolises.