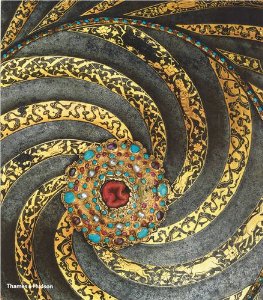 The Tsars and the East: Gifts from Turkey and Iran in the Moscow Kremlin

Published to accompany the Smithsonian Institutions major exhibition, this book features more than sixty exceptional objects that large embassies, diplomatic missions and trade delegations from Ottoman Turkey and Safavid Iran offered to the Tsars of Russia. Ranging in date from the early sixteenth to the late seventeenth century, these lavish gifts and tributes include rarely seen arms and armour and jeweled ceremonial vessels and regalia intended for the Russian court or the Orthodox church. Some of the finest pieces are equestrian in nature: stirrups with pearls, golden bridles with turquoises and rubies, and saddles covered with velvet and silk. This book explores the reasons why these extraordinary gifts were presented, their artistic and cultural impact, and how they inspired artists to develop a highly original visual identity that became a potent symbol for the Russian state and the Orthodox church.