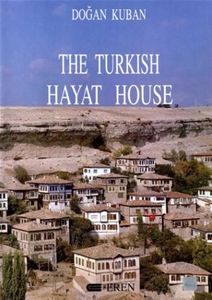 The Turkish House is both a picturesque image and a historical fact. Since the sixteenth century, descriptions of travelers and the engravings and paintings of western artists depicting Ottoman lands introduced to the world images of a different urban tradition and the existence of a different dwelling concept. Europeans regarded the physiognomy of the Ottoman capital, Istanbul, and other great cities of the Empire such as Edirne, Bursa, Izmir, Konya, Amasya and lesser towns from the Balkans to Iran and Mesopotamia with a mixed feeling of wonder and disdain. The Turkish urbanscape - the khans and caravansaries, covered bazaars, Turkish baths, the wooden houses with their lattice-screenned windows and bold overhaning projections aligned along the narrow and tortuous streets, well-lit and lavishly-decorated rooms in which dignified men in magnificent robes sat in characteristic postures on low divans, women of the harem looking over the streets from behind wooden screens - all these idiosyncratic images of a preindustrial society, idealized, romanticized and distorted by narrators and artists, excited the imagination of the western public about the nonchalant life of the Turks and the so-called Orient.