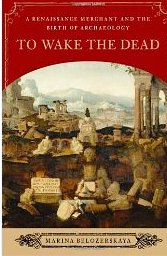 To Wake the Dead: A Renaissance Merchant and the Birth of Archaeology

At the beginning of the fifteenth century, a young Italian bookkeeper fell under the spell of the classical past. Despite his limited education, the Greeks and Romans seemed to speak directly to him—not from books but from the physical ruins and inscriptions that lay neglected around the shores of the Mediterranean.
As an international merchant, Cyriacus of Ancona was accustomed to the perils of travel in foreign lands—unlike his more scholarly peers with their handsome libraries and wealthy patrons, who benefited greatly from the discoveries communicated in his widely distributed letters and drawings. Having seen firsthand the destruction of the world’s cultural heritage, Cyriacus resolved to preserve it for future generations. To do so he would spy on the Ottomans, court popes and emperors, and even organize a crusade.