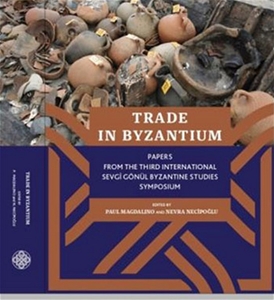 In the Byzantine Empire, Constantinople served not only as an administrative, military, and religious center, but also as one of trade and commerce. The city was selected as the new imperial capital due to its geographical advantages, its vast hinterland, its situation as an ideal vantage point for travel by land and sea, and its safe natural harbors, making it a perfect location for trade. Considering that medieval Anatolia, and especially Constantinople, was located at the center of a broad trade network and was a center of both production and consumption, trade is rightfully a continuing subject matter of Byzantine studies. In addition, since 2004, the Directorate of the Istanbul Archaeological Museums has carried out archaeological research in Üsküdar, Sirkeci, and Yenikapı, as part of the Marmaray and Metro projects. The excavations have revealed spectacular artifacts and new knowledge on Byzantine trade, ship-building technology, and ships and their cargo. In light of harbor excavation results and information accumulated from other ongoing research, it was the right time to re-evaluate trade in Byzantium. New findings and knowledge arising from the Yenikapı excavations, in particular, gave reason to revisit issues of trade in Byzantium again.