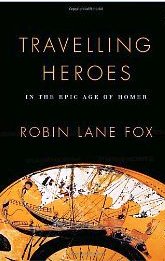 Travelling Heroes: In the Epic Age of Homer

The eighth century B.C. was the formative age of the great epics of Homer, a remote and, in some ways, mysterious era. In this groundbreaking book, Robin Lane Fox takes us into that time before history to explore questions ranging from the origins of the Greek gods to the spread of classical culture in the Mediterranean world. It is a remarkable tour de force of scholarship and creative reasoning, written with flair and the authority gained from a lifetime of study and personal experience of key sites.

Presented as a kind of historical detective story, Travelling Heroes draws upon archaeology, ancient texts, and new discoveries to develop a fresh and provocative thesis: that migrants from in the Greek island of Euboea settled in specific places both in the Near East and in Italy and that what they found there helped shape their most distinctive myths. In fascinating detail, Lane Fox describes the journeys of the travellers and the contacts they made with Phoenicians, Assyrians, and the people of north Cyprus and Syria, and he shows the way they drew themes—and even references to particular topographic features—into what would become the classic stories of gods and legend. He also offers new insights into Homer himself.