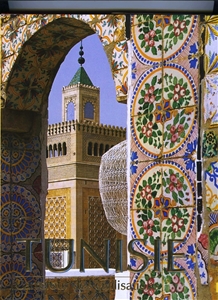 The men and their land: a presentation of the natural habitat and people. A table of Tunisian economy at the end of the 20th century.- From Carthage to Tunis: originally populated by Berbers, Tunisia has the unique character of having been marked throughout its history by various foreign people: Phoenicians, Romans, Vandals, Byzantines, Arabs, Turks, and Europeans. This section examines the influence of these different peoples.- Tunisian life: traditional life, marked by the weight of customs and religion. Religious heritage makes Tunisia a country with great richness. It is also contemporary, with an unequaled level of adaptation to modernity in its different regions.- Tours: these are presented to guide visitors through the country, describing the many sites to see, which are not only archeological. Eight tours are presented: Tunis, Cap Bon, the northern coast, the inner Roman cities, Kairuan, the Sahel, the great South, Djerba.