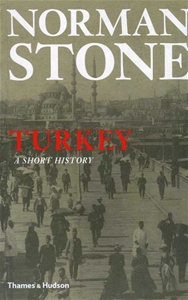 Who are the Turks and what role has the empire and nation they forged had on the world stage?

The celebrated historian Norman Stone deftly conducts the reader through the complex story of Turkey’s past, from the arrival of the Seljuks in Anatolia in the eleventh century to the modern republic applying for EU membership in the twenty-first. He brilliantly draws out the larger themes of Turkey’s history, resulting in a book that is a masterly exposition of the historian’s craft.

This is an account of epic proportions, featuring rapacious leaders such as Genghis Khan and Tamerlane through the glories of Sultan Süleyman the Magnificent to Kemal Atatürk, the reforming genius and founder of modern Turkey.

Stone examines the reasons for the astonishing rise and the long decline of the Ottoman Empire and how for its last hundred years the Great Powers argued over a regime in its death throes. Then, as now, the position of Turkey – a country balanced between two continents – provoked passionate debate.

The book concludes with a trenchant examination of the Turkish republic created after the First World War, where East and West, religion and secularism, tradition and modernization are vibrant and sometimes conflicting elements of national identity.

Norman Stone is Director of the Turkish-Russian Centre at Bilkent University, Ankara. He was formerly Professor of Modern History at the University of Oxford and also taught for many years at Cambridge University. His previous books include The Eastern Front, 1914–1917 (winner of the Wolfson Prize), World War One: A Short History and The Atlantic and Its Enemies: A Personal History of the Cold War.