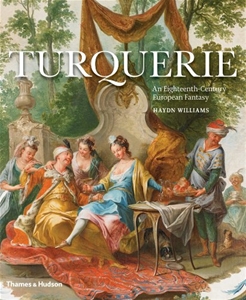 This is the first book, painstakingly researched from many scattered sources, to identify the key elements of what in our own time has become a popular and collectable area of the fine art and decorative arts: turquerie. With the arrival of Ottoman embassies and their elaborate entourages at the courts of Europe in the early eighteenth century, a fascination with all things Turkish took hold among royalty and aristocracy that lasted until the French Revolution. Turbaned figures appeared in paintings, as ceramic figures, and on the stage; tented boudoirs became the rage; and crossed crescents, palm trees, and camels featured on wall panels, furniture, and enamel boxes. Here Haydn Williams, an expert on the decorative arts, shows how it was a theme that sparked varied responses in different places. Its most intense and long-lasting expression was in France, but its reach was broad–from a pavilion built by Catherine II in Russia to the Turkish tents erected along the Elbe to celebrate a royal marriage in Dresden in 1719; from an ivory statuette of a janissary created for King Augustus II of Poland to the costumes worn for a carnival celebration in Rome in 1748. The book is organized into eight thematic and chronological chapters that concentrate on particular subjects, such as painting, tents, interiors, and costumes and settings for the stage. In all, this splendid volume enables the reader to indulge in the whimsies and fancies of the European elite of the eighteenth century. 270 illustrations in color and black-and-white