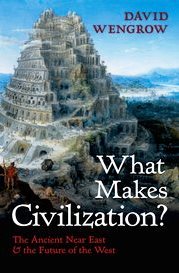 In What Makes Civilization?, archaeologist David Wengrow provides a vivid new account of the 'birth of civilization' in ancient Egypt and Mesopotamia (today's Iraq). These two regions, where many foundations of modern life were laid, are usually treated in isolation. Now, they are brought together within a unified history of how people first created cities, kingdoms, and monumental temples to the gods.

But civilization, as Wengrow shows, is not only about such grand monuments. Just as importantly, it is also about the ordinary but fundamental practices of everyday life that we might take for granted, such as cooking food and keeping the house and body clean.Tracing the development of such practices, from prehistoric times to the age of the pyramids, the book reveals unsuspected connections between distant regions, and provides new insights into the workings of societies we have come to regard as remote from our own. It also forces us to recognize that civilizations are not formed in isolation, but through the mixing and borrowing of culture between societies.

The book concludes by drawing telling parallels between the ancient Near East and more recent attempts at reshaping the world order to an ideal image. Are the sacrifices we now make in the name of 'our' civilization really so different from those once made on the altars of the gods?

Readership: All those interested in the history of ancient Egypt and Mesopotamia, ancient archaeology, the birth of human civilization, and the relationship between Europe and the Middle East over the centuries