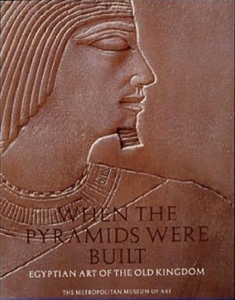 When the Pyramids Were Built: Egyptian Art of the Old Kingdom

The Old Kingdom (about 2650-2150 B.C.E.) was the first golden age of Egyptian culture, a period that determined the form and character of Egyptian art for centuries to come. From the Third through the Sixth Dynasty, not only were the pyramids built in vast construction efforts, but artists working in an array of mediums and techniques-- stone, wood, precious metals, monumental statuary, reliefs, and wall paintings-- created masterpieces that still have the power to move us more than four millennia later.

This splendid volume, published to accompany a landmark exhibition organized by The Metropolitan Museum of Art in New York, the Réunion des Musées Nationaux in Paris, and the Royal Ontario Museum in Toronto, brings together 115 Old Kingdom masterworks from museum collections throughout the world. Included are sculptures executed with such an acute observation of musculature and body movement that they brought an unprecedented realism to the rendering of men, women, children, and animals. Several depictions of family groups in particular show the sensitivity with which Old Kingdom artists illuminated human relationships. Individual masterpieces include the monumental statue of Hemiunu, thought to be responsible for the construction of the Great Pyramid at Giza; groups representing the Fourth Dynasty king Menkaure with a queen and various deities; and a unique alabaster statuette showing the Sixth Dynasty queen Ankh-nes-meryre II holding her son, the child king Pepi II, in her lap.