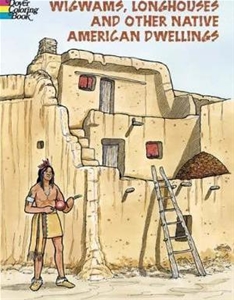 Because the geography of North America encompasses such a broad range of climatic and environmental conditions, the dwellings of early Native Americans varied widely in appearance and constructions. Using materials taken from the surrounding physical environment, the builders constructed diverse lodgings -- from adobe pueblos in the Southwest to birch bark wigwams in the Northeast. This carefully researched coloring book spotlights the wide array of Native American shelters.
Thirty detailed illustrations depict, among other structures, the exterior of a Seminole chickee in Florida; a Mandan earth lodge on the Great Plains; an Iroquois longhouse in upstate New York; a Taos adobe pueblo in the Southwest; a Hopi food storage room in Arizona; an Anasazi Cliffside dwelling at Mesa Verde, Colorado; and an Inuit iglu in the Arctic.
Extensive, fact-filled captions accompany the illustrations, making this fascinating portrayal of how the first Americans built and used their homes an excellent educational resource as well as an entertaining coloring book.