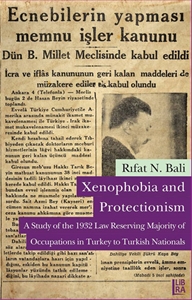 The “Law on Trades and Services Reserved to Turkish Nationals” was passed by the Turkish Grand National Assembly in June 1932. It aimed to exclude from the Turkish job market foreign nationals residing in Turkey who were employed in petty trades and services, such as drivers, street vendors, servants in hotels, etc. On one hand the law was a manifestation of the mentality and policies of protectionism that developed in reaction to the 1929 World Economic Crisis and its effects on the Turkish economy. At the same time, the law was also a xenophobic reaction that had its origins in Turkish society’s bitter collective memories of their struggle for independence and the early years of the Turkish Republic. This study takes up the subject of the law’s actual application on the basis of previously unused archival documents.