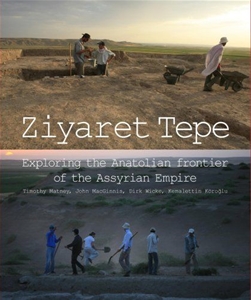 Ziyaret Tepe: Exploring the Anatolian frontier of the Assyrian Empire

Ziyaret Tepe, the ancient city of Tušhan, was a provincial capital of the Assyrian Empire, in its day the greatest the world had ever seen. The excavations captured in this innovative book – the governor's palace, military barracks and mansions of the rich – chart the empire's history from its expansion in the early 9th century BC to its dramatic fall three centuries later, providing insights into the daily lives of both the commoners and Assyrian elites who inhabited this ancient frontier city. Fieldwork over 18 seasons uncovered areas of both the lower town and the great mound of Ziyaret Tepe which looms 22 metres above it, a record of thousands of years of human occupation. Today in southeast Turkey, near the Syrian border, Tušhan yielded exceptional finds, such as elaborate wall paintings, a hoard of luxury items burned in a cremation ritual 2,800 years ago, and a cuneiform tablet that hints at a previously unknown language. The story of the project is told by the specialists who dedicated years of their lives to it. Geophysicists, ceramicists, readers of cuneiform, experts in weaving, board games and Neo-Assyrian politics joined archaeologists, zooarchaeologists, archaeobotanists and many others. But this is no dry field book of dusty digging. Both accessible and scholarly, it is a lively, copiously illustrated record of teamwork, a compelling demonstration of the collaboration – the science, artistry and imaginative reconstruction – that makes modern archaeology so absorbing.

Chapter 3
Work on the Tušhan excavations begins
The royal palace
Mud brick: unsung star of the archaeologist’s world
The palace cremation burials
Burial practices
The gods of the land
The Tušhan city wall
Forts along the River Tigris
The southern gate to the city
The military barracks by the city wall
Beer for the troops
Elite residences
Wine... the drink of the elite
Evolution of the roof
The administrative complex
The pebble mosaics
Preparing food and drink
Feasts
Bread

Chapter 4
Ziyaret Tepe reveals its rich and varied finds
The Tušhan archive
The fall of the Empire
Seals and sealings
Weights and measures
Tokens
Board games
Artefacts of ivory and bone
Textiles and wool
Archaeobotany: Farming and food production
Zooarchaeology: Reading the bones
Decorative ivoryReading the ceramics
Ceramic disks
The working of iron in the Middle Iron Age
The humble nail
Copper and bronze
Jewellery
Ground stone
Chipped stone
Sweeping the floors
Beads

Chapter 5
Conservation and communication
Diyarbakır Museum
Communicating the excavation results
The new museum in Diyarbakır
The end of the Assyrian Empire and the fall of Tušhan
Director’s epilogue
Appendix A: A-Z of the operation areas
Appendix B: The team
Index
Sponsors