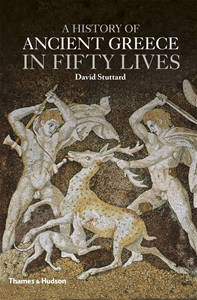 A History Of Ancient Greece In Fifty Lives

This book creates a vivid picture of life in all arenas of the ancient Greek world, moving from Sicily to Afghanistan, and from Macedonia to Alexandria; delving into the worlds of mathematics and geography, rhetoric and historiography, painting and sculpture; exploring the accounts of historians and mystics, poets and dramatists, political commentators and philosophers.

As well as the most famous politicians and writers, including the Athenian statesman Pericles, the Spartan general Leonidas, the philosopher Plato and the scientist Archimedes, the reader will meet less well-known figures such as Milo, the Olympic wrestler; Aspasia, the brilliant female intellectual, who taught rhetoric to Socrates; Zeuxis, the painter who inventedtrompe l’oeil; and Epaminondas, the Theban who taught tactics to Philip of Macedon and so destroyed his own city.